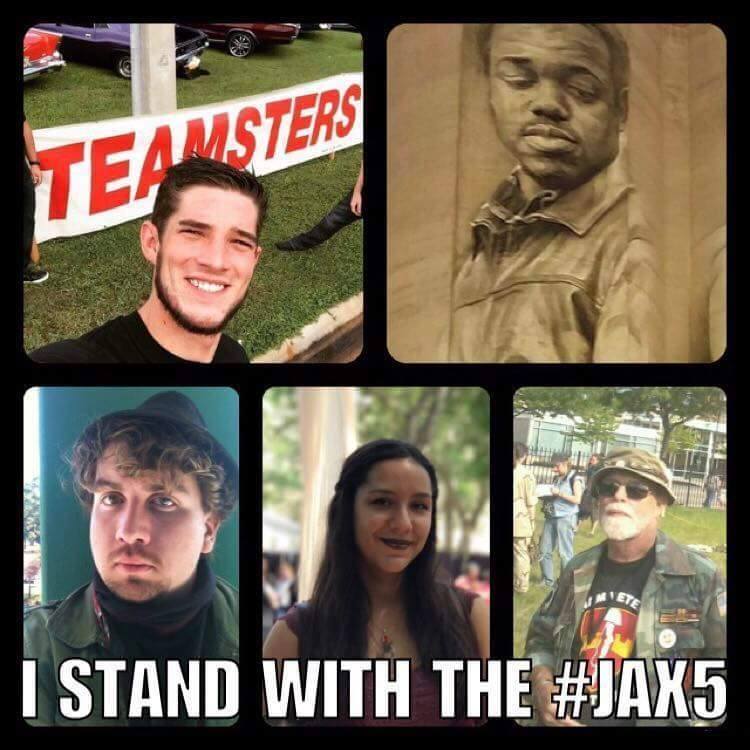 Please donate to the Jacksonville Five bail and defense fund!

Donate for bail and defense!

Call State Attorney Melissa Nelson at
904-255-2500 and say, “Drop the charges against the Jacksonville Five!”

Please visit the page below for regular updates:
Justice for the Jacksonville Five

April 13, 2017 – The Jacksonville Five are a group of anti-war protesters in Florida beaten and arrested by police at a “No War in Syria” rally held on Friday April 7, 2017. A right-wing provocateur appeared with a Trump flag, and then harassed and shoved anti-war activists, while police did nothing to him. Then the Jacksonville Sheriffs Office (JSO) physically attacked the anti-war protesters who did nothing wrong.

The police descended upon Connell Crooms, a deaf African American man, who had been leading chants. The police savagely beat, kicked and tased Crooms until he was unconscious and had to be taken to the hospital. Crooms is a well-known Teamster and a Black Lives Matter leader.

The police also punched Vietnam veteran Willie Wilder in the face and arrested the 74-year-old peace activist. Christina Kittle, the leader of the Jacksonville Coalition for Consent was thrown to the ground and arrested. Transgender activist Tom Beckwith was also tackled and arrested.

As protesters were leaving the park to do jail support, the police arrested union activist and anti-war speaker Dave Schneider, charging him with “felony inciting a riot” for organizing the anti-war protest. Police never arrested the right-wing provocateur. In fact, there are many photos on social media of him posing with JSO police, including Sheriff Mike Williams.

Jacksonville quickly rallied to the defense of the Jacksonville Five. The next day, April 8, over 200 people rallied to demand all charges be dropped. Leaders of the labor, African American, and progressive movements chanted, “Drop the charges!” The mother of Connell Crooms gave a tearful testament to her son’s good character and denounced the police attack on her son, “JSO should not be allowed to get away with this type of behavior.”

The rally demanded a full independent investigation into the police misconduct of April 7. Protesters are also demanding an independent investigation into a police spying program. Just weeks earlier the Florida Times Union newspaper reported the Sheriff’s Office was spying on activists, including the Jacksonville Five, with photos of Dave Schneider, Connell Crooms and Christina Kittle appearing.

Jacksonville Sheriffs are lying and denying, claiming the protesters “incited a riot.” Fortunately, dozens of people took video of the police brutality. The social media pages of the provocateur contain ties to white supremacist groups and to Sheriff Mike Williams who denies he knows him, despite their photo together at a Trump rally.

To add insult to injury, the total bail amount issued by the court for all five arrestees came out to over $157,000. They are outrageously charging the people who were beaten and arrested by the police with serious felony charges. We need to mobilize national support and raise enough money to cover this and pay for the defense.

There is a continuing campaign to drop the trumped-up charges and investigate the abuses by the JSO.

Please call the State Attorney for the Florida 4th Circuit, Melissa Nelson at 904-255-2500, and demand she drop the charges against the Jax5.

Please share this link to donate to the Jacksonville Five legal defense fund: