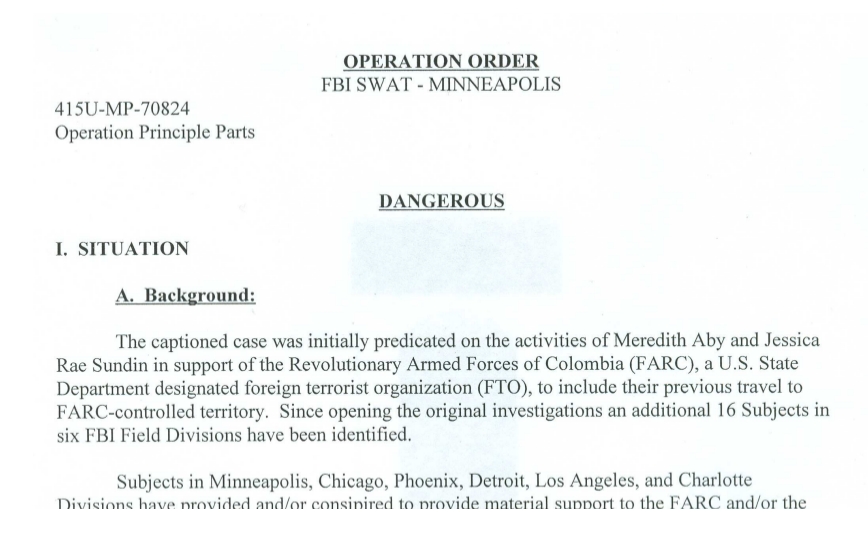 FBI agents, who raided the home of Mick Kelly and Linden Gawboy, took with them thousands of pages of documents and books, along with computers, cell phones and a passport. By mistake, they also left something behind; the operation plans for the raid, “Interview questions” for anti-war and international solidarity activists, duplicate evidence collection forms, etc. The file of secret FBI documents was accidentally mixed in with Gawboy’s files, and was found in a filing cabinet on April 30. We are now releasing them to the public.

The raid at the Kelly/Gawboy home was one of the many coordinated raids at Minneapolis homes and the offices of the Anti-War Committee on September 24, 2010. Two additional homes were raided in Chicago. To date, 23 anti-war and international solidarity activists have received subpoenas to appear in front of a Chicago Grand Jury headed by U.S. Attorney Patrick Fitzgerald.

Taken as a whole, the secret FBI file shows the willful disregard for the rights of anti-war and international solidarity activists – particularly the first amendment rights to freedom of speech and association. The documents make it clear that legal activity in solidarity with the peoples of Colombia and Palestine is being targeted. The documents use McCarthy-era language, which gives one the feel that the 1950s red scare has returned. And finally, the documents show the chilling plans for the armed raid that took place at the home of Kelly and Gawboy on September 24, 2010.

The documents show that public advocacy for the people of Colombia was the genesis of the FBI investigation. The ‘Operations Order’ for the FBI SWAT Team states “The captioned case was initially predicated on the activities of Meredith Aby and Jessica Rae Sundin in support of the Revolutionary Armed Forces of Colombia, a U.S. State Department designated foreign terrorist organization (FTO), to include their travel to FARC controlled territory.”

While we have no way of knowing if it was speaking tours or educational events on Colombia that got them so riled up, there is something we can state with certainty: There is nothing illegal about traveling to Colombia, or visiting the areas where the FARC is in charge. This is something that journalists, including U.S. journalists, do, and we have yet to hear of their doors being broken down. Upon returning from Colombia, Aby and Sundin spoke at many public events about their experiences.

The FBI interview questions for Meredith Aby ask “1) Have you ever met Lilia [sic] Obando? 2) Where? 3) When? 4) Why?” Liliana Obando is a well-known Colombian trade unionist who spoke in the Twin Cities at an event organized by the Anti-War Committee. She received a visa to travel in the U.S. from the U.S. government.

She spoke about the sickening human rights violations that were being carried out by the Colombian government and its paramilitary allies. While we understand that the Colombian government is the third largest recipient of U.S military aid, and that government officials would prefer that that people here in the U.S. don’t get a chance to hear about human rights abuses committed with their tax dollars, the fact remains: there is nothing criminal in trying to learn the truth. The FBI is attacking the right of anti-war activists to speak out against U.S. foreign policy.

Likewise, the “interview questions” make a big deal about delegations that visited Palestine. The Israeli authorities try to disrupt these trips because people return from them and expose the gross human rights violations that are carried out in the context of the military occupation. But once again – this is a legal activity that activists have every right to engage in.

The documents show how the FBI investigation expanded outwards, starting with Colombia and soon focusing on Palestine. How did the FBI get involved? The most likely explanation is that a undercover police officer going by the name “Karen Sullivan” infiltrated the Anti-War Committee shortly before the 2008 Republican National Convention. Among the first people she met were Meredith Aby and Jess Sundin, who often spoke at public events about what they saw in Colombia.

Karen Sullivan – the professional liar – then gave her reports to the FBI, paving the road to the September 24 raids.

When Wisconsin Senator Joe McCarthy went on a red-baiting witch hunt in the 1950s, communists, socialists and progressives of all stripes were hounded out of jobs, housing, the entertainment industry and institutions of higher education. More than a few people were jailed for their ideas. The secret FBI documents indicate an investigation is underway that takes its cues from this shameful past.

The FBI documents include 57 interview questions about Freedom Road Socialist Organization, the organization that some of those who were raided or subpoenaed to the Grand Jury are members of. The questions include; “Are you a member?” “How many members are there?’’ “Who are the leaders?” And on and on and on. It is like pages of the calendar have been turned back 60 years.

In the United States there is a constitutional right to association. Like-minded people are allowed to form groups and political parties that promote their views. FRSO members, along with others, were very active in organizing the massive anti-war protests at the Republican National Convention. They participate in the labor movement, community organizing, and the anti-war movement too. And they advocate that capitalism should be abolished and replaced with socialism. Given the bank bailout, continuous wars and the economic crisis it is not unreasonable to see these activities and views as a breath of fresh air.

In the documents, the “Operations order” for FBI SWAT for “Operation Principal Parts” the raid on the Kelly/Gawboy home has the word “DANGEROUS” in underlined bold type at the top of the page. FBI agents were told to bring assault rifles, machine guns and two extra clips of ammunition for each of their side arms. Two paramedics were to stand by in the event of causalities. Other documents include photos of Kelly and Gawboy, as well as pictures of stairs leading to their front door and the front door itself.

What transpired on September 24 was this. Gawboy was awoken by the FBI pounding on the door. When she stated she wanted to see the search warrant, agents used a battering ram on the door, breaking the hardware and shattering a fish tank in the process. Gawboy was taken down the front steps in her nightgown while the FBI swat team entered her home.

Kelly, who learned to shoot while in Boy Scouts, owns guns – just like a lot of Minnesotans. The “Operation Plan” also claims that Kelly “offered to provide weapons training” – an outright lie that originated with the police infiltrator “Karen Sullivan” or a fiction writer at the FBI office.

The bottom line is this: there can be no justification for the raid in the first place, and still less for it to be done by agents smashing doors and wielding machine guns. This is a recipe for people getting hurt or killed. The events of September 24 and the ongoing grand jury are not about “material support of terrorism,” as any normal person would understand it. What is happening is this: anti-war and international solidarity activists are being targeted for practicing our rights to speak out and organize. We have done nothing wrong. Our activism is making this world a better place.