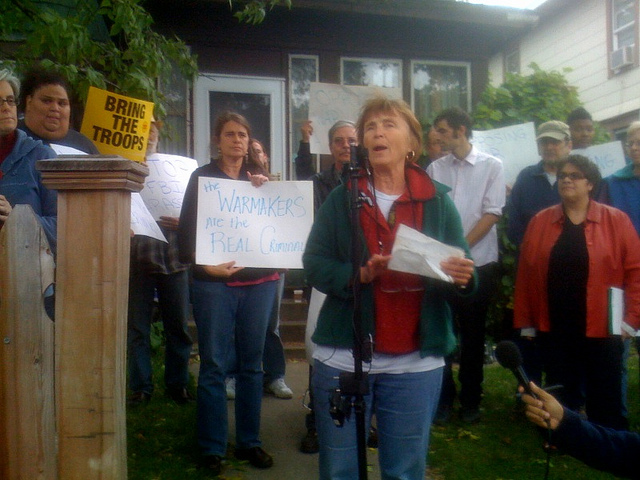 What we've known for the past few weeks has been confirmed.  Three activists from the Twin Cities, Tracy Molm, Sarah Martin and Anh Pham are being called back before the Grand Jury in Chicago.  They do not yet have dates of appearance.
We are calling for a week of action to stop the FBI and Grand Jury repression for the week of Nov. 29 – Dec. 3.  We are urging activists to focus on U.S. Congress people, demanding that they take action to stop the Grand Jury. Go to their congressional offices, or if that is not practical, to your Federal Building. Further information on the call for action will be forthcoming.  We expect further news on the legal situation in the next few weeks.
The statement that follows was released to the media in Minneapolis/St. Paul MN this evening. A Press Conference will take place tomorrow, November 18th at 4:30 pm at the Federal Courthouse in downtown Minneapolis.
FOR IMMEDIATE RELEASE
November 17, 2010

Three well-known Twin Cities anti-war and international solidarity activists, Tracy Molm, Anh Pham, and Sarah Martin have received word from the U.S. Attorney’s Office that that they will be called to appear in front of a Chicago Grand Jury.
This is a continuation of a campaign of federal intimidation of anti-war, labor and international solidarity activists that started on September 24 with raids on homes and offices in Minneapolis and Chicago and FBI visits to activists in other cities.
During the September 24 raids, the FBI handed subpoenas to testify before a federal grand jury to 14 activists in Illinois, Minnesota, and Michigan. All of them submitted legal documents invoking their Fifth Amendment rights and did not appear before the Grand Jury.
Now, Tracy Molm, Anh Pham, and Sarah Martin are being told that they will have to appear in front of the Grand Jury.
“Saying these three activists should appear in front of a Grand Jury represents a dangerous escalation of the government interference and repression against the anti-war movement. This is a scare tactic to dampen the right to speak out against U.S. wars and interventions around the world,” said Jess Sundin of the Anti -War Committee.
“The FBI campaign against anti-war activists is a major threat to anyone who questions U.S. policies around the world. Many of those who had been targeted in these raids are long-time peace, labor and social justice activists,” said Mick Kelly of the Committee Against FBI Repression.