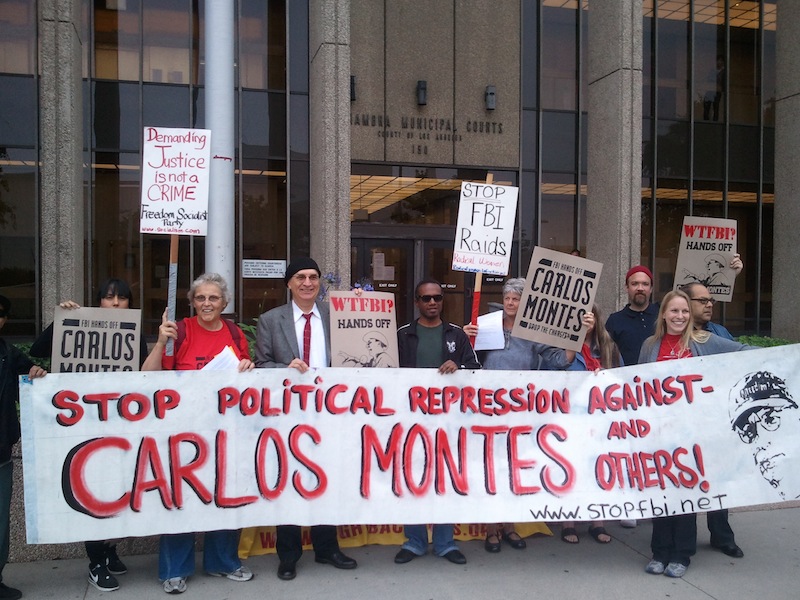 Support Carlos Montes as he goes to court Friday, August 12!

Sample call: “My name is ________ and I am calling from [city, state]. I’m calling about Carlos Montes of Los Angeles. He is one of the anti-war activists being targeted by the FBI. I want you to tell Attorney General Holder [or President Obama]:

On Friday, August 12, Carlos Montes will appear in a Los Angeles court again, for a preliminary hearing. At his last court date on July 6, Carlos pled “Not guilty!” to six charges, including a felony charge each for a firearm and ammunition, and four related to the permits’ paperwork. Like millions of Americans, Carlos has for many years held legal permits. So why is it that all of a sudden the government is saying there is a problem? These charges are a pretext to attack Carlos for his years of activism.

Please join us in calling U.S. Attorney General Eric Holder and President Obama, demanding a stop to the prosecution of Carlos Montes. We need to stop the persecution of political activists like Carlos, like the 23 Midwest anti-war and international solidarity activists, people like you and me.

Make no mistake; the U.S. government’s trial of Carlos Montes is an attack on the immigrants’ rights and anti-war movements. So please call today and let Holder and Obama know we are building a movement that will not bow down to dirty tricks and political repression.

In addition, the Los Angeles Committee to Stop FBI Repression is mobilizing to pack the courtroom on the morning of Friday, August 12, in Department 100 at the Criminal Courts Building, 210 W. Temple Street, Los Angeles, when Carlos Montes appears.

Carlos Montes is a veteran Chicano activist known for his leadership of the 1968 East Los Angeles education reform movement (see film Walkout), the historic Chicano Moratorium against the U.S. war in Vietnam, and the recent immigrants’ rights mega-marches of 2006. Carlos Montes was a co-founder of the Brown Berets, a Chicano youth organization that stood for justice, equality, and self-determination.

With the 2003 Bush administration war and occupation of Iraq, Montes helped form and lead L.A. Latinos Against War. In recent years, Carlos helped initiate and organize the Southern California Immigration Coalition, to fight against Immigration and Customs Enforcement (ICE) and police repression.

Now Montes himself is the target of government repression and the FBI’s dirty tricks. When the FBI raided several Midwest homes and served subpoenas on September 24, 2010, Carlos Montes’ name was listed on the FBI search warrant for the Anti-War Committee office in Minneapolis–the organizing center for the 2008 Republican National Convention protests, where Carlos participated.

Then on May 17, 2011, the LA Sheriffs broke down Carlos’ door, arrested him, and ransacked his home. They took political documents, a computer, cell phones and meeting notes having nothing to do with the charges. The FBI attempted to question Montes while he was handcuffed in a squad car, regarding the case of the 23 Midwest anti-war and solidarity activists.

On June 16, 2011, Carlos appeared in court and obtained the arrest documents showing the FBI initiated the raid. A reporter interviewing a Los Angeles Sheriff sergeant confirmed that the FBI was in charge. Carlos Montes is facing six felony charges with the possibility of 18 years in prison due to his political organizing. Carlos Montes case is part and parcel of the FBI raids and political repression centered in the Midwest. We need you to take action against this repression.

You can also invite Carlos Montes to speak using a live Internet video call. It is easy to do and works well. More details on the video calls coming next week.