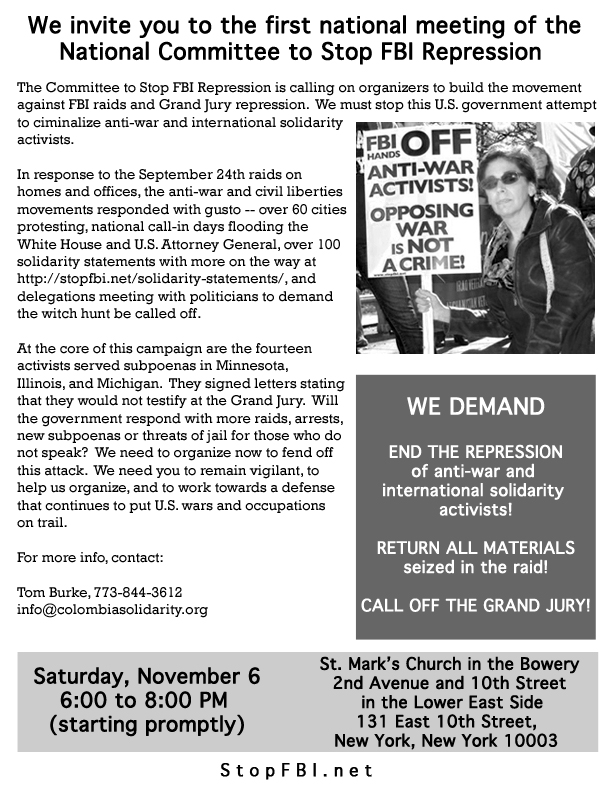 The Committee To Stop FBI Repression is convening a national meeting in New York City on November 6th, 2010, at 6:30 pm.  We want to invite all those interested in building the movement against FBI raids and the Grand Jury attempt to criminalize anti-war and international solidarity activists.  We have done nothing wrong and we are speaking out and organizing to have the Grand Jury called off. We have a lot of work pressing upon us, and while the attack is bad, it offers our movement an opportunity to unite, strengthen, and grow!

On September 24th, the FBI raided two homes in Chicago, and five homes in Minneapolis, along with the Anti-War Committee office. Armed and threatening, the FBI turned people’s homes upside down and took their computers, cell phones, documents, newspapers, framed photos and children’s art work.  All together fourteen anti-war and international solidarity activists in Minnesota, Illinois, and Michigan were subpoenaed to appear before the Grand Jury.

The anti-war and civil liberties movements responded quickly and with great spirit.  Over 60 cities protested, with a report from Springfield, MA, coming in just today.  Activists passed out 12,000 fliers at the One Nation rally in Washington D.C.  In Minneapolis, more than 500 rallied at the FBI offices in response to the repression.  More than 1300 people marched in Chicago against war and repression on October 16th.  The national call-in days are flooding the White House receptionists and shutting down Eric Holder’s answering service.  The personal appeals targeting politicians and those with power are important.  This is all great and leads us to NYC (looking for a space to hold 100 people in Manhattan) on November 6th to get more organized and congeal a leadership that will beat back this attack and others that are coming.

Here is an important update–each of the fourteen activists subpoenaed to appear signed a letter from the lawyers stating they would NOT testify.  The Assistant U.S. Attorney, Brand Fox, told the lawyers he would withdraw the subpoenas, but he would say nothing more. So this is not over yet. The government is not likely to let go.  The government has a number of options—more raids, arrests, new subpoenas, or offering immunity to some with the threat of jail if they do not speak.  For the time being, the FBI continues to harass other anti-war activists at their homes and work places, trying to divide and intimidate.  So we need you to remain vigilant, to help us organize, and to work towards a defense that continues to put U.S. war and occupation on trial.

Tom Burke, for the Committee To Stop FBI Repression