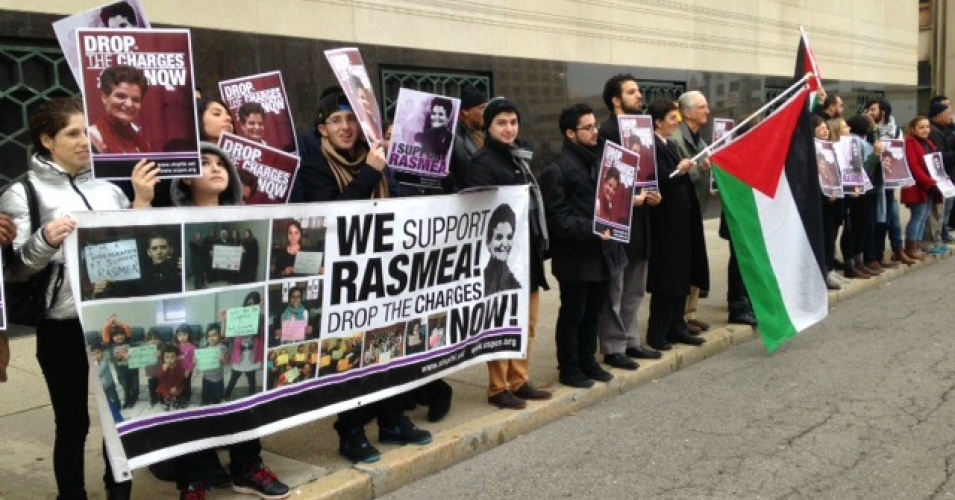 On Monday, June 13, 2016, Rasmea Odeh will appear with her attorneys before Judge Gershwin Drain for a status conference at the federal courthouse in Detroit, Michigan. Supporters will travel to Detroit as well, as they have done for all the previous court dates, to urge for a new trial for this Palestinian American icon who was convicted of a politically-motivated immigration charge in 2014, and sentenced to 18 months in prison and deportation last year.

In a February decision, the Sixth Circuit Court of Appeals sent the case back to Judge Drain, saying he had wrongfully barred the testimony of a torture expert that was critical to Rasmea’s defense. At the trial, Rasmea was not allowed to tell the entire story of Israel forcing her to falsely confess to bombings in 1969, when she endured over three weeks of vicious sexual, physical, and psychological torture at the hands of the Israeli military.

Rasmea suffers from Post-Traumatic Stress Disorder (PTSD) because of this torture, which, according to world renowned psychologist, Dr. Mary Fabri, caused her to suppress the horrible recollection of the arrest when she answered questions on her immigration application. Judge Drain excluded Dr. Fabri’s testimony from the trial, and disallowed any evidence about the rape and torture. Appeals court judges sided with Rasmea’s defense team, and sent the case back to district court. If Judge Drain cannot determine new legal avenues to exclude the expert testimony, Rasmea will be granted a new trial.

“The conviction of Rasmea Odeh was a travesty of justice. Rasmea is a hero, who has dedicated her life to organizing for Palestinian liberation, and to building a society with dignity and justice for all. We will stand with Rasmea in Detroit on June 13, as we have been many times before, and call for a new trial, where she can finally tell her story,” said Jess Sundin of the national Rasmea Defense Committee.

Members of the committee were in DC just this week pressing Rasmea’s case to legislators, including Congressmen Danny Davis and Luis Gutierrez, respectively.

The committee is asking supporters to make plans to be in Detroit on the morning of June 13, and to donate to support the legal and community-based organizing work ahead. For more information, visit justice4rasmea.org and follow #Justice4Rasmea.

Demands Grow for US to Drop Case Against Palestinian Activist, teleSUR tv, Jan. 28, 2016