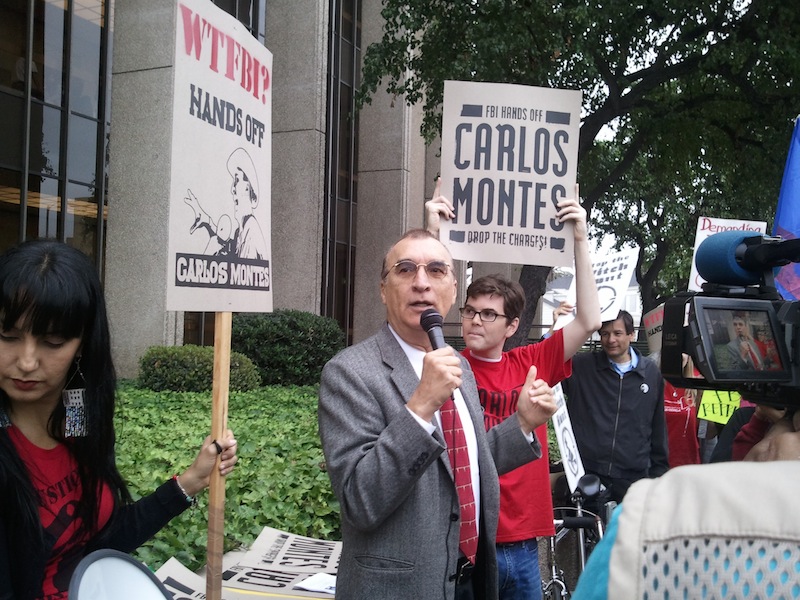 Los Angeles (June 16, 2011) – Over 100 protesters rallied this morning outside the Alhambra City Courthouse in Los Angeles County in solidarity with Carlos Montes, a well known Chicano community organizer and immigrants rights activist. Montes’ home was raided in a pre-dawn raid by the LA SWAT team and the FBI on May 17th, in which agents took political documents, papers, computers and cell phones, and was ordered to appear in court today regarding several firearms related charges.

Carlos Montes demanded the charges against him be dropped, which the District Attorney denied. Montes then requested the search warrant and police report related to the raid on his home.

At first the District Attorney refused to turn over the search warrant and police report, then relented on the conditions that the documents are heavily edited and the press is not allowed access to them.

Government secrecy continues to surround the Montes raid, similar to the FBI raids and grand jury repression of 23 fellow anti-war and international solidarity activists in the Midwest in September 2010, as the Washington Post reported earlier this week.

“This is a political attack,” said Carlos Montes, speaking from outside the Alhambra City court house after his hearing. “A pretext of a gun was used to break into my house and ransack it. The fact that the FBI was there questioning me about my political activities and going through my documents has nothing to do with my charges.”

Jess Sundin of the Committee to Stop FBI Repression in Minneapolis said,“We don’t believe the charges against him,” continued Sundin. “The charges were just a pretext for the raid on his home, where the FBI was present to investigate his political organizing. Political papers were seized, along with computers and cell phones, just like the raids in the Midwest last September 2010.”

##Protests across the United States in solidarity with Montes

Across the United States, 18 other cities are joining Montes today in protest against the U.S. government’s expanding repression of anti-war and international solidarity activists.

According to FBI documents discovered in May and released by the Committee to Stop FBI Repression, Federal officials are targeting Montes because he is part of the group that organized protests against the 2008 Republican National Convention in St. Paul, MN. Montes, a community organizer for more than 40 years, was a leader of the 1968 Los Angeles high school walkouts against racism – documented in the popular HBO film “Walkout!” – and a founder of the Brown Berets. More recently, Montes opposed Arizona’s racist anti-immigrant laws and the ban on Chicano studies.
Broad support for activists targeted by FBI repression.

The Committee to Stop FBI Repression continues to build momentum for its campaign to stop the FBI and government repression of activists. To date, over 400 organizations have issued solidarity statements with the CSFR, while unions representing over 800,000 workers have adopted resolutions in support of those being targeted by the FBI. Nine congressional representatives have written letters of concern to A.G. Holder, while tens of thousands of people across the country are participating in street protests and signing petitions in solidarity with the CSFR.