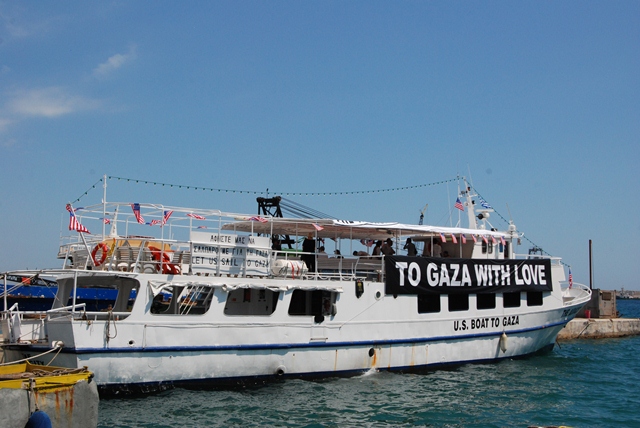 The Committee to Stop FBI Repression stands in solidarity with the activists of the Gaza flotilla ships and the people of Palestine. As Americans, we denounce the U.S. government’s support for the Israeli blockade on Gaza and demand that Palestinians get access to the food, water, medical supplies and building materials they need for their daily lives. We denounce the U.S., Greek, and Israeli sabotage and blocking of the flotilla taking the much-needed humanitarian aid to Gaza.

We are particularly outraged by U.S. State Department statements that regard the delivery of humanitarian aid to Gaza as some sort of crime — equivalent to “conspiring to deliver material support” to Hamas. The expanding criminalization of humanitarian aid means the U.S. government is threatening arrests, trials, and lengthy prison sentences for Americans on board the solidarity boat named, “The Audacity of Hope”. The Gaza flotilla is an incredibly brave act of international solidarity, not a criminal act punishable by the United States. The real criminals are the elected and government officials working to keep badly needed supplies out of Gaza!

We oppose the U.S. government repression of humanitarian aid. The U.S. State Department and the U.S. Department of Justice cannot be allowed to silence solidarity with Palestine. We know of this repression firsthand. On September 24th last year, FBI agents raided the homes of anti-war and international solidarity activists in Minneapolis and Chicago as well as the Minnesota Anti-War Committee office. U.S. Attorney Patrick Fitzgerald issued 14 subpoenas in Minneapolis, Illinois, and Michigan. Fitzgerald ordered the 14 activists to appear before a federal grand jury, claiming to investigate material support for terrorism. The number of activists subpoenaed to date has grown to 23, and one of the common threads is the activists’ solidarity work with Palestine.

The repression is intensifying too, as we see with the related case of anti-war and Chicano leader Carlos Montes in Los Angeles. Carlos, raided by the FBI political police on May 17, plead “Not Guilty” to charges this week. Carlos Montes was named in the Anti-War Committee subpoena in Minneapolis because of his role in protesting the 2008 Republican National Convention where Palestine was prominent. On July 6, Carlos Montes said outside court, “This attack on me is a pretext. They are using it to attack me because of my political activity — denouncing U.S. intervention in Colombia, in Afghanistan, in Iraq, and in Palestine.”

We ask our supporters to salute the Gaza flotilla participants from 22 countries, including the 37 American passengers, and to support the next steps being organized by the [USTOGAZA](http://ustogaza.org/). We ask our supporters to join with voices across the country to demand that humanitarian aid to Palestine not to be considered “material support for terrorism” and to continue to support efforts like the Gaza flotilla so that we can continue to express solidarity with the people of Palestine.

International solidarity is NOT a Crime!

Please take the following steps to the support Carlos and others facing FBI repression for their activism: