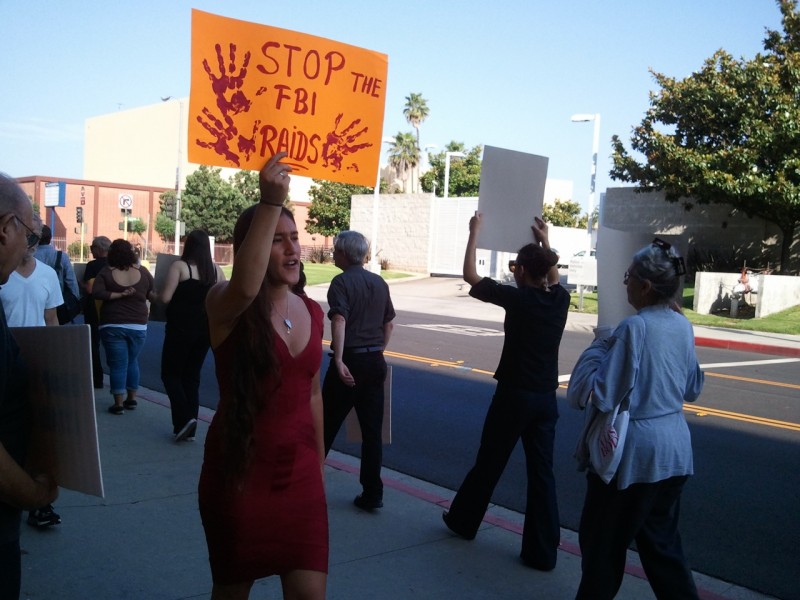 With a courtroom packed so there were no empty seats, Carlos Montes plead “Not Guilty” to six felony charges in court on July 6, 2011. Defense attorney Jorge Gonzales said the Los Angeles District Attorney is using “selective enforcement” to target Carlos. The U.S. government is using a 42-year-old charge from 1969 to prosecute Carlos Montes today for a weapon and an ammunition charge, and four charges of perjury on his weapons permits.

The FBI and LA Sheriff’s SWAT team broke down the door and [raided Carlos Montes’ home in May](http://www.stopfbi.net/2011/5/19/fbi-and-la-county-sheriff-raid-veteran-chicano-activist-carlos-montes). It is clear from the statements of local police and law enforcement officials on July 6 that the FBI is leading the charge in targeting Carlos. The [Pasadena Star-News coverage](http://www.stopfbi.net/2011/7/7/alhambra-resident-chicano-activist-pleads-not-guilty-six-felonies) provided confirmation that the FBI was behind the raid. The Star-News article stated, “Los Angeles County sheriff’s Sgt. Miguel Mejia said Montes was booked in East Los Angeles, but the investigation into his activities was led by either the Sheriff’s terrorist unit or the emergency operations bureau, working with the FBI. ‘It was an FBI action as I recall,’ said Sgt. Jim Sully. ‘We assisted them.’”

Like the [23 activists in Minneapolis, Chicago, and Grand Rapids, Michigan](http://www.stopfbi.net/about/profiles), Carlos Montes is being targeted for his political activism in the anti-war, international solidarity, and immigrants’ rights movements. The FBI attempted to question Carlos Montes about the [Freedom Road Socialist Organization](http://www.frso.org) when his home was raided. Carlos Montes, who helped organize protests against the 2008 Republican National Convention in St. Paul, MN, saw his name on the FBI subpoena for the Minneapolis Anti-War Committee office raid of September 24, 2010.

Carlos Montes said outside court, “This attack on me is a pretext. They are using it to attack me because of my political activity – denouncing U.S. intervention in Colombia, in Afghanistan, in Iraq, and in Palestine.”

The next court date is set for August 12 and is being moved to the Los Angeles court downtown where high profile cases appear.

The Committee to Stop FBI Repression held a successful national call in day to U.S. Attorney General Eric Holder to demand he drop the charges against Carlos Montes. The phone rang off the hook at A.G. Holder’s office as people called to demand that he call off the Grand Jury investigation of anti-war and international solidarity activists practicing their rights to free speech and organize, and that the FBI return the seized belongings—political documents, meeting notes, cell phones, computers, etc., of Carlos Montes and the others raided in September 2010.

People all across the country are taking action in support of Carlos Montes and other targets of FBI repression.

Please take the following steps to the support Carlos and others facing FBI repression for their activism: