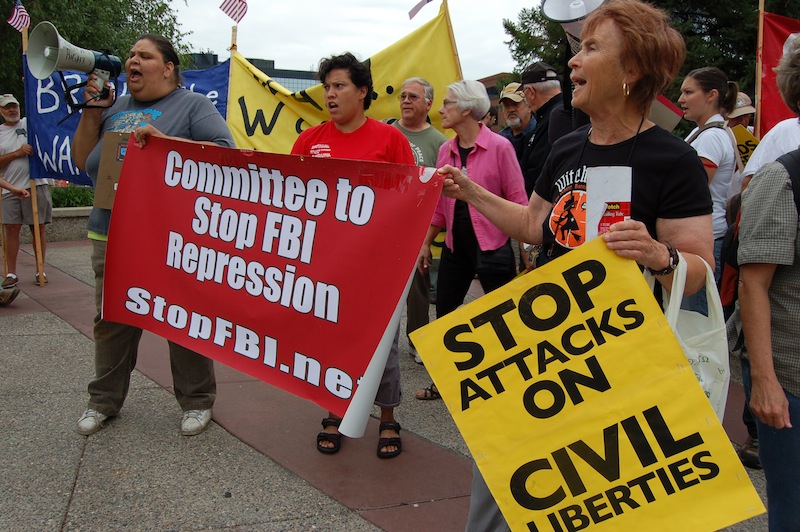 The Committee to Stop FBI Repression (CSFR) is asking you to build the movement against political repression on the one-year anniversary of the Sept. 24, 2010 FBI raids on anti-war and international solidarity activists. We need your continued solidarity as we build movements for peace, justice and equality.

The storm of political repression continues to expand and threaten. It is likely to intensify and churn into a destructive force with indictments, trials, and attempts to imprison anti-war activists. The last we knew, U.S. Attorney Patrick Fitzgerald was preparing multiple indictments as he and Attorney General Eric Holder attempt to criminalize the targeted activists and the movements to which we dedicate our lives.

It is one year since the FBI raided two homes in Chicago and five homes plus the Anti-War Committee office in Minneapolis, eventually handing out 23 subpoenas. The anti-war activists’ homes were turned upside down and notebooks, cell phones, artwork, computers, passports and personal belongings were all carted off by the FBI. Anyone who has ever been robbed knows the feelings – shock and anger.

The man responsible for this assault on activists and their families, on free speech and the right to organize, is U.S. Attorney Patrick Fitzgerald in Chicago. Fitzgerald has an ugly record of getting powerful Republicans like Dick Cheney and Karl Rove off the hook, while mercilessly pursuing an agenda to scare America into silence and submission with the phony ‘war on terror.’ Fitzgerald is attempting to criminalize anti-war activists with accusations of ‘material support for terrorism,’ involving groups in Palestine and Colombia.

First the U.S. government targeted Arabs and Muslims, violating their civil rights and liberties and spying on them. Then they came for the anti-war and international solidarity activists. We refuse to be criminalized. We continue to speak out and organize. We say, “Opposing U.S. war and occupation is not a crime!” We are currently building a united front with groups and movements to defeat Fitzgerald’s reactionary, fear mongering assault on anti-war activism and to restore civil liberties taken away by the undemocratic USA PATRIOT Act.

Many people know the developments in the case, but for those who do not, we invite you to read a [timeline at stopfbi.net](http://www.stopfbi.net/about/timeline). We think the repression centers on this: During the lead up to the Republican National Convention in Saint Paul, Minnesota, a federal law enforcement officer, using the phony name of “Karen Sullivan” got involved and joined the Anti-War Committee and Freedom Road Socialist Organization in Minneapolis. She lied to everyone she met and helped the FBI to disrupt many activities in the anti-war, international solidarity and labor movements in Minnesota – and also other states and even over in Palestine. It is outrageous.

In fact, many of those being investigated travelled to Colombia or Palestine to learn firsthand about U.S. government funding for war and oppression. There was no money given to any groups that the U.S. government lists as terrorist organizations. However, we met people who are a lot like most Americans – students, community organizers, religious leaders, trade unionists, women’s group leaders and activists much like ourselves. Many of the U.S. activists wrote about their trips, did educational events, or helped organized protests against U.S. militarism and war. In a increasingly repressive period, this is enough to make one a suspect in Fitzgerald’s office.

This struggle is far from one-sided however. The response to the FBI raids and the pushback from the movement is tremendous. Minneapolis and Chicago immediately organized a number of press conferences and rallies with hundreds of people. Over the first two weeks after the raids, 60 cities protested outside FBI offices, from New York to Kalamazoo, from traveled to the Bay Area. The National Lawyers Guild convention was in New Orleans the day of the FBI raids and they immediately issued a solidarity statement and got to work on the case. Solidarity poured in from anti-war, civil rights, religious and faith groups, students and unions. Groups and committees began working to obtain letters of support from members of Congress. The solidarity was overwhelming. It was great!

It is possible that U.S. Attorney Fitzgerald thought he was picking on an isolated group of activists. Instead, those raided proved to have many friends and allies from decades of work for social justice and peace. Over the months, all the targeted activists refused to appear at the grand jury dates set by U.S. Attorney Fitzgerald’s office. In November 2010, a large crew of us travelled to New York City to found the Committee to Stop FBI Repression, after the United National Antiwar Committee meeting.

In December 2010, U.S. Attorney Fitzgerald’s office called in three of the Minnesota women and threatened them. We prepared a campaign in case they were jailed for refusing to speak. The FBI also delivered subpoenas to nine more Arab-American and Palestine solidarity activists in December. Their grand jury date was on Jan. 25, 2011, and we organized protests in over 70 American cities, plus a few overseas. The movement was building and expanding, so we organized conferences with over 800 participants in the Midwest, the South, and on the East and West Coasts. While we were organizing a pushback, the FBI was making new plans.

On May 17, 2011, at 5:00 a.m., the Los Angeles, California Sheriff, under the direction of the FBI, busted down the front door of Chicano leader Carlos Montes, storming in with automatic weapons drawn and shouting. The early morning raid was supposedly about weapons and permits, but they seized decades of notes and writings about the Chicano, immigrant rights, education rights and anti-war movements. The FBI attempted to question Carlos Montes while he was handcuffed and in the back of a L.A. sheriff squad car. Montes is going to another preliminary court date on Sept. 29, prepared to face six felony charges, carrying up to three years in prison for each, knowing he is extraordinarily targeted by the FBI. We will walk every step of the way with Carlos Montes, and more. Montes was with us at the Republican National Convention protests; his name was included on the search warrant for the Anti-War Committee office in Minneapolis, and the FBI attempted to question him about this case. We ask you to support Carlos Montes and to organize speaking events with him and local protests on his important court dates, Sept. 29 being the next one.

The same week the FBI raided Carlos Montes in May 2011, the CSFR came back with a big revelation – we released a set of documents, the FBI game plan, which the FBI mistakenly left behind in a file drawer at one of the homes. The [FBI documents](http://www.stopfbi.net/2011/5/18/secret-fbi-documents-reveal-attack-democratic-rights-anti-war-and-international-solidarity) are on the CSFR website and are fascinating to read. Fitzgerald and company developed 102 questions that come right from a McCarthy witch-hunt trial of the 1950s. It is like turning back the clock five decades.

The whole intention of the raids is clear: They want to paint activists as ‘terrorists’ and shut down the organizing. They came at a time when the rich and powerful are frightened of not just the masses of people overseas, but of the people in their own country. With a failing U.S. war in Afghanistan, a U.S. occupation of Iraq predicted to last decades, a new war for oil and domination in Libya, a failing immigration policy that breaks up families and produces super-profits for big business, and now a long and deep economic crisis that is pushing large segments of working people into poverty, the highest levels of the U.S. government are turning to political repression.

The only hope for the future is in building stronger, consistent and determined movements. In a principled act of solidarity, the 23 subpoenaed activists refuse to testify before the grand jury. This sets an example for others.

In addition, the outpouring of support and mobilization into the streets from the anti-war, international solidarity, civil rights, labor and immigrant rights movements means that not one of the 24 has spent a single day in jail. That is a victory.

We ask you to stand with us, to stay vigilant and to hold steady as we proceed to organize against wars abroad and injustice at home and as we defend Carlos Montes from the FBI charade in Los Angeles.

**[Please come to the Committee to Stop FBI Repression one-day Conference in Chicago on November 5, 2011.](http://www.stopfbi.net/national-conference-2011)**